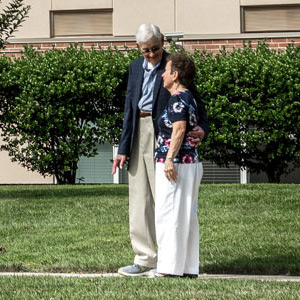 Providing a good life today and a solid plan for the future.

Independent living at Vinson Hall Retirement Community is dedicated to serving military officers and their families, as well as retired government employees (GS-14 and higher) from any federal agency.

Our continuum of care is available to all seniors in the McLean area.

What residents can expect.

As a Life Plan Community, we offer independent living with access to a continuum of care. These levels of living include assisted living, skilled nursing and rehab, memory care, and in-residence home care. We also offer temporary respite care to area families who care for a loved one.

Residents who move into one of our independent living apartments can expect several advantages over living at home, including:
‍

While our independent living residences are reserved for retired military and government employees plus their families, our continuum of care is open to all area seniors for direct admittance.
‍

For residents, not for profit.

Vinson Hall is a not-for-profit community, supported by the Navy Marine Coast Guard Residence Foundation (NMCGRF) a 501(c)(3) organization. All our revenue, whether it be resident fees, charitable donations or NMCGRF revenue, is reinvested into the community to enrich the lives of residents, not outside stakeholders.

Our community began as a labor of love, conceived by the Navy Officers’ Wives’ Club of Washington, D.C. Back in 1959, this selfless group had the vision of creating a community that was “secure, companionable, and dignified” — a home where kindness and socializing would flourish. This seed of an idea for Navy widows quickly captured the attention of senior sea service leaders, as well as Navy, Marine Corps and Coast Guard wives’ clubs worldwide. Two years later, the Navy Marine Coast Guard Residence Foundation was formed to support this endeavor.

On June 23, 1969, the vision came to life. Vinson Hall Retirement Community opened its doors to a senior living lifestyle of dignity, security and friendship to sea service widows regardless of financial status.

We partner with local grade schools and volunteer groups to provide moral support for families of deployed troops.

We believe that by reaching out and giving back, everybody benefits.

Libby is a second-generation aging services professional. With this background, the draw to the residents and staff at Vinson Hall Retirement Community was unmistakable.

Born in Ohio, and raised in Kansas City, Libby went to the College of Wooster for undergraduate studies, and received her master’s degree at the University of Maryland in the Erickson School. As a licensed nursing home administrator, preceptor, and certified aging specialist, Libby’s life mission is to make the world the best it can be for older adults by highlighting each individual’s best self. As a LeadingAge Virginia board member, and Leadership Academy Coach, Libby lives her mission through her daily work at Vinson Hall Retirement Community and also at a more macro level.

Prior to coming to Vinson Hall, Libby was the chief operating officer for Ingleside, and prior to that, executive director at Westminster at Lake Ridge. Richmond, Virginia, was home for 20-plus years, where Libby spent her professional life at Westminster Canterbury Richmond, and started a family with her husband of almost 25 years, Jeff.

When Libby and Jeff are not working, they can be found with anything having to do with their son and daughter, and four-legged daughter, Bella.

Rick joined Vinson Hall Retirement Community in 2018. Prior to his arrival in Virginia, he was the CEO for four years at Oakwood Lutheran Senior Communities in Madison, Wisconsin. He was the CFO for one year beginning in July 2013. He spent another 10 years with two other long-term care providers in the role of CFO. He has worked with a variety of organizations — from large public companies to family-owned businesses. Rick is a CPA and spent about seven years in public accounting, mostly focused on accounting and business systems consulting. In 1984, he received a B.S.B.A. in finance and an A.A.S. in data technology from the University of Louisville. Rick’s early career in both public accounting and private industry gave him the opportunity to work with companies of all sizes and in various industries. He has led numerous enterprises to exceptional growth and stability through effective process improvement, insightful managerial skills, and peerless financial leadership. With demonstrated capabilities in management development, financial reporting and analysis, innovation and business unit operational guidance, he has proven his ability to push organizations toward success.

Lisa Desmond came to Vinson Hall Retirement Community in 2019 to fill VHRC’s newly established Director of Clinical Operations position. Lisa, who was born and raised in West Virginia, is a registered nurse. Lisa received her bachelor’s of science in nursing from the University of South Carolina. She also has dual master’s degrees in business administration and nursing, with a specialty in health care management.

Prior to joining the VHRC team, Lisa had an accomplished background as a home health care nurse, serving in and leading practices across the country, including in Alaska and Hawaii. Immediately before joining the VHRC team, Lisa initiated and was the director of a pilot home care program at Westminster at Lake Ridge, which is part of the Ingleside Senior Living Company. This program eventually expanded to become Ingelside at Home, a home health care service, with offices at each of the three Ingleside properties in the Washington, D.C.-metro area. Lisa served as the Executive Director of Ingleside at Home from 2017 to 2019.

Lisa and her husband, Michael, have two children, Nate and Layla. All four are avid Steelers fans. When not meeting the needs of VHRC’s residents, Lisa loves to travel and especially enjoys family trips to the beach.

Analisse was born in Cochabamba, Bolivia and immigrated to Virginia with her mother and brother when she was three years old. She earned her bachelor’s degree in health care administration with a minor in sociology from Mary Baldwin University. It was during her junior year of college through an administrator-in-training internship that Analisse discovered her passion for working with older adults. Analisse went on to earn her Nursing Home Administrator license in 2016, which she utilized in senior living communities in Kansas and Georgia before coming to Vinson Hall Retirement Community in 2019. Analisse was a much loved member of the Vinson Hall administrative team before being promoted to be the Assistant Administrator of The Sylvestery in February 2021. Analisse has a young daughter, Faviana, and during her free time, she loves spending time with her daughter and her family.

Senior Director of Arleigh Burke Pavilion and The Sylvestery

Antoinette joined Vinson Hall Retirement Community in 2019. She has been in the senior living industry for about seven years and loves it. Growing up, Antoinette helped care for her grandmother, who suffered from Alzheimer’s disease. It was that experience that showed her she loves working with seniors. Antoinette obtained her assisted living administrator license in 2013. She also holds a master’s degree in health care administration and a bachelor’s in speech and language pathology. Antoinette is married with two beautiful children. She loves spending time with her family and friends. In her spare time, she likes to read and play basketball.

Bishal comes to VHRC with more than 14 years of dining services management experience. Most recently, Bishal was the Director of Food and Beverage at Ginger Cove Retirement Community in Annapolis.

Bishal received his education as a culinary specialist in the Unites States Army at Fort Lee. He is currently in the Army Reserve, drilling monthly at 200th MP Command, Ft. Meade, MD. He also earned his degree in Hospitality Management from Northern Virginia Community College and is a Certified Food Protection Professional (CFPP) and a Certified Dietary Manager (CDM).

Bishal was born and raised in Nepal. He now lives in Beltsville, Md. with his wife, Binita, and their two daughters, Nava and Aviva. In his free time, he loves to catch up with news and watch sports. He is an avid soccer fan – and follows the Chelsea Football Club.

Haider holds a master’s degree in management of aging services from the University of Maryland, Baltimore County, and an undergraduate degree in hospitality and tourism management from the University of Maryland, Eastern Shore. Haider has over 15 years of experience in the senior living field in various roles. He’s passionate about about providing older adults with superior service and building connections with residents, their family members and employees. Haider lives in Annadale and enjoys spending time with his family and friends.

In her free time, Dr. Young enjoys yoga, baking, reading historical fiction and spending lots of time outside with her husband and four young children.

Senior Director of Philanthropy and Engagement

Michelle has an incredible background as an editor, working for such publications as Architectural Digest, The Washington Post, and The New York Magazine. During her time in McLean, she has been active in community groups like the McLean Project for the Arts, where she served as a Board Member from 2006-2017, and on the Executive Committee from 2012–2017.
Michelle is married with two adult children. Her husband is a native of Denmark. They lived in Copenhagen for several years, where she learned to speak Danish. In her free time Michelle enjoys travel, writing, photography, and practicing yoga.

Shawn Bostic joined the VHRC team in February 2020 as the Director of Facilities and Environmental Services.

Shawn earned his bachelor’s degree from Averett University with a major in art and a minor in art history. During and after college, Shawn worked in his father’s automotive shop where he rebuilt performance engines and restored vehicles.

During his free time, Shawn loves spending time with his wife and their six children. He also stays active coaching his kids’ baseball and football teams.

Stephanie joined Vinson Hall Retirement Community in fall 2014 as the independent living marketing counselor. She has since been promoted to assistant administrator and then to director of marketing in 2019. Stephanie holds a B.S. in psychology and theater from Mary Washington College and a master’s in gerontological studies from Miami University. She is also a licensed nursing home administrator. With over 10 years of experience in senior housing, Stephanie enjoys meeting and educating new residents and their families on the services available to them. Stephanie was selected as a fellow for the 2017 inaugural class of the LeadingAge DC, Delaware, Maryland and Virginia Leadership Academy, where she was able to hone her leadership philosophy and skills.

The mother of three teenage boys, Stephanie enjoys hiking, camping and traveling. Married to her college sweetheart for over 20 years, Stephanie loves to plan “adventure weekends” for her family, taking them to both state and national parks across the country.

After working in human resources for more than 12 years, Winoka became a licensed nursing home administrator in 2016. Winoka holds a bachelor’s degree in human resource management and a master’s in instructional design/training development.

Winoka was born in Fulda, Germany, and spent her first 18 years as an Army brat. She then raised two children and is now the doting grandmother of five. An avid reader, Winoka shares that she has more books in her home library than she has time to read … 300 and counting. She has lived in the Washington, D.C., metro area since 1998 and enjoys its history, good food and diverse culture. It has become her home.

She is excited to be a part of the Vinson Hall team, helping ensure both our residents and employees live life their way.

To learn more about our Life Plan Community, please complete the form on this page. We’ll be in touch shortly.

It’s time to expect more convenience, hospitality and fulfillment from your senior lifestyle.